Today, our journey takes us to the Near East to the ancient Nabatean city of Petra. We will be heading south from Amman, Jordan to an area below the Dead Sea. Petra had been on my bucket list for years, so I approached it with great enthusiasm.
Nothing could have prepared me for the breath-taking awe of the 2.7-mile (4.3 km) walk through narrow red sandstone canyons and open spaces. The city is magnificent in scope and astounds the mind to consider how the ancients built their facades, most of which today are burial sites that have survived. They even had a sophisticated system of collecting water and using hydraulics to insure they had a year-round water supply in an arid desert climate. 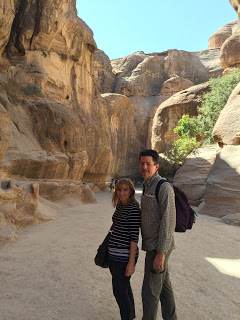 Donna and husband Jim entering the main avenue of Petra 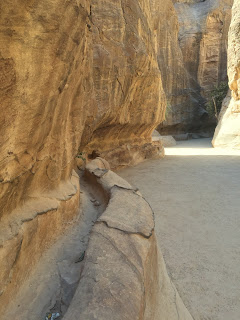 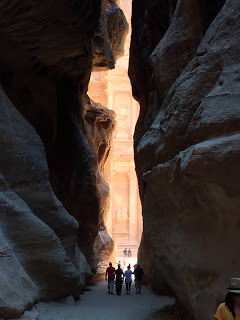 Leaving the Canyon into the Treasury Area 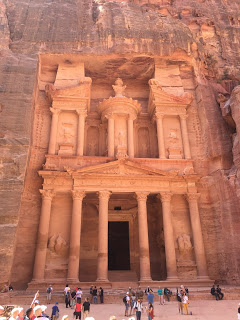 The Treasury
In 2007, more than 100 million people voted Petra as one of the new 7 Wonders of the World. Most people associate this archaeological site with the 1989 film Indiana Jones and The Last Crusade. Still, by far, it’s the historical drama that unfolded in the region and the rise of the Nabatean culture that captures the imagination, regarding this once vibrant capital city.
Prior to the 6thcentury B.C. when the Nabateans first arrived, the region already experienced a colorful history. The Bible recounts in Genesis 25 – 27 that Abraham’s son Isaac had twin sons, Jacob and Esau. A tense relationship existed between them, and because of Esau’s impetuous nature, he lost his birthright. He fled to the area in southwest Jordan between the Dead Sea and the Gulf of Aqaba and established the Kingdom of Edom. (Of note: Esau’s name and Edom both mean “red” in Hebrew–Esau’s complexion having been ruddy and the region composed of red sandstone.)
During the Exodus (most accepted to be around 13th – 12th century B.C.), the route taken by Moses led them through Edom. A place here has been marked as the rock that Moses struck and drew water from in Exodus 17 and is called Moses’ Spring or Ayoun Mousa.
Edom thrived between the 13th to 8th centuries B.C., most notably controlling the King’s Highway and collecting tribute from traveling merchants. However, in the next two centuries, Edom experienced a period of decline until the sixth century when the Babylonians demolished it–a biblical prophecy foretold long before Edom’s downfall. (See Jeremiah 49:7 – 22, Ezekiel 25:12 – 14; 35:1 – 15, Amos 1:11 – 12, Isaiah 21:11 – 12, and Obadiah 1:1 – 14.)
Beginning in the sixth century B.C., the Nabateans–a Bedouin nomadic tribe–migrated from Arabia. Over time, they gave up the nomadic lifestyle, gained the Edomites’ lucrative trade routes, and carved edifices into the red sandstone region, most predominantly in the capital city, they called Raqmu (Petra). 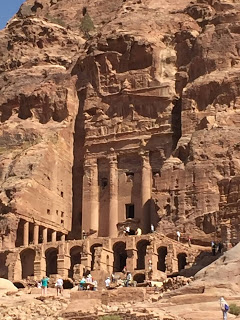 The Nabateans prospered for centuries, acquiring wealth and power as caravan merchants and controlled the Transjordan into Syria. In 2 Corinthians 11:32 – 33, we read that Paul had to sneak out of Damascus in a basket through a window to escape from the ethnarch under King Aretas, who was a Nabatean.
The Nabateans maintained a peaceful co-existence with Rome for several centuries until 106 A.D., when Rome took complete rule of the region. Earthquakes in 363 and 747 A.D. severely damaged Petra, and the Bedouin who remained protected Petra from outsiders for more than 1,000 years.
Then in 1812, a Swiss explorer, Johann Ludwig Burckhardt, took on the alias of a devout Muslim, and under the auspices of making a pilgrimage was given access to the ancient city. He published his find, and slowly Europeans flocked to see the wondrous site. The deception caused a great disdain for foreigners by the Bedouins for many years afterward.
Today, the Bedouin welcome visitors to the region, selling their wares along the avenue of a city that once was a thriving metropolis. It is truly worthy of being called one of the 7 Wonders of the World. 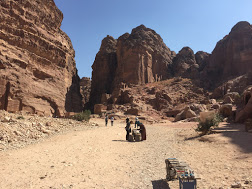 Donna in the Background, Surveying the Souveniers