Have you ever wondered what it would be like to live underground?
Today in my History, Travel, and Adventure Blog, I switch directions back to Europe and take us to a lesser-known, but no less fascinating place in the Andalucían province of Granada, Spain.
Located on a plateau at almost 3,000 feet (913 meters) in the shadow of the Sierra Nevada is the city of Guadix. The city’s history goes back to ancient Roman times, and sources say Julius Caesar founded Guadix to mine the craggy ochre hills for silver. He called the town Julia Gemella Acci, and residents today are still called Accitanos.
However, it’s the Barrio de las Cuevas or Neighborhood of Caves that draws awe and wonder and compels one to stop and stare and explore what lays beneath the surface of this community. For amidst a dry, rugged landscape, a moon-like topography dotted with white chimneys, poking through the earth, gives evidence of a people known as the troglodytes, who have made their homes in caves for more than five hundred years. But what drove them underground? 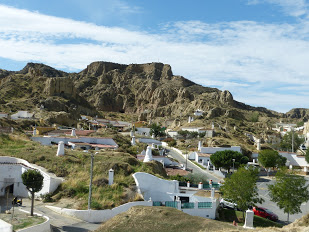 Barrio de las Cuevas
From the 8th to the 15th centuries, much of Spain was under Moorish rule. After several civil wars, Guadix became an important capital of a Moorish kingdom under El Zagal at the end of the Nasrid Dynasty. But in 1492, Granada fell to Catholic Spain, and the town was conquered. At the beginning of the seventeenth century, the Moors were expelled from Spain, and it’s said that many took refuge in the caves around Guadix.

Today, almost 19,000 people live in Guadix, many of them inhabiting 4,000 caves as permanent homes in and closeby to the town. An attraction to living underground is a year ’round temperature of sixty-six degrees Fahrenheit (19 degrees Celsius) in an arid climate that can reach the high 90s F in summer (35 c) and get down to the low 20’s (-6 c) in winter. Rather than a dank, dark environment, the caves have been modernized, some of them turned into luxurious dwellings, and some have even been converted into hotel accommodations for visitors who would like the experience. The area is considered to have the biggest concentration of inhabited caves in Europe.

When we visited, my friend Cristina and I toured one of the caves, owned by a sweet man whose name is Jose. Friendly and excited to show us through his home, he led us through quite comfortable and homey rooms that include an up-to-date kitchen, living room, dining room, bathroom, and displayed pictures of his family. When we asked if he would live anywhere else, he said no. His ancestors have lived in this particular cave for generations, and he couldn’t imagine living anywhere else. And I can see why. He has everything he needs, and then some. 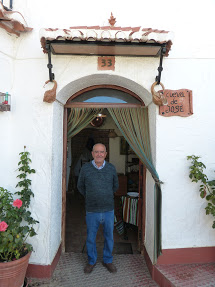 Jose Welcoming us at the Front Door 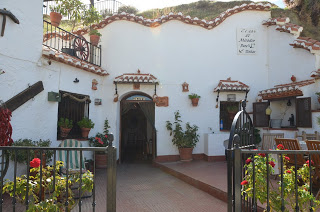 The Front of Jose’s Home 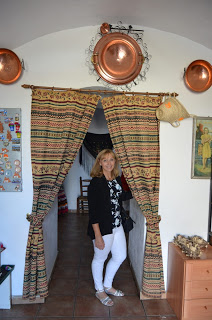 Donna in the Foyer of Jose’s Home 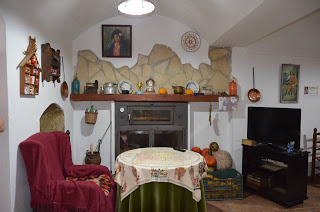 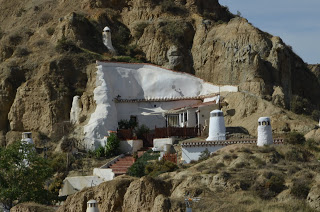 Jose’s Neighbor’s Home
Besides the intriguing Barrio de las Cuevas, Guadix boasts an impressive cathedral in the heart of the city that combines the three centuries (16th – 18th) of Gothic, Renaissance, and Baroque styles that it took to erect it and the ochre-colored fortress or Alcazaba de Guadix built during the tenth and eleventh centuries by the Moors. Both testify to the captivating contrast of cultures that have contributed to molding Spain into what it is today.