Have you ever visited a place that so intrigued you that you just had to find out more about it even after you returned home? In my case, it took a while, but I blame the magnificent setting at a lakeside hotel in Varenna, Italy on the shores of Lake Como for setting me on a path of discovery several years later. 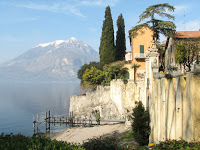 Foxe’s book of martyrs dedicates one page to the Waldensians, yet these relatively obscure people had a great impact on Christian Europe during the second millennium A.D. and helped set the stage for the Reformation in the sixteenth century. Their story of enduring faith and valor high in the Cottian Alpscaptivated my attention. I had to return to Italy to investigate further.  (Right: Lake Como from the Villa Cipressi.)
I headed to the Waldensian valleys west of Turin, Italy to talk to local scholars and visit the many museums and sites dedicated to the Waldensian story throughout the region. 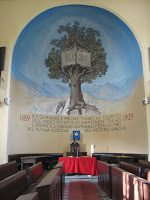 I began my quest at the Waldensian Museum of Torre Pellice, which provides a journey through eight centuries of Waldensian history, archaeology, and ethnographic development–their religious dissidence, the Protestant Reformation, Religious Wars, Waldensian exile and their Glorious Return, their grant of civil rights in the nineteenth century, and twentieth-century events that changed the way the church engages with the world. With these pictures in mind, I set out to roam the rest of the valley.

Monument, Oath Sibaoud, Bobbio Pellice
Some say this courageous group banded together in 1170 A.D. under Peter Waldo, who took a vow of poverty and wanted the pope to consider their grievances. Others have suggested that these great men and women of faith hail from the first-century church and carried on the traditions of their ancestors throughout the first two millennium A.D.
After spending a number of days combing the area, I became even more convinced the Waldensian story needed to be told. For whether the Waldensian narrative begins in 1170 A.D., as is the official church position, or, in fact, their ancestry is as ancient as the first-century church, it is a real-world drama that breathes life into a steadfast faith that stays the course no matter the cost. 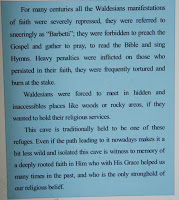 Explanation of the Cave
Their story became the impetus for my contemporary romantic suspense series I self-published in 2015 and 2018. I wanted to create compelling circumstances for my protagonists in the present that mimicked a need to finish the race as their ancestors had done through their enduring faith and courage in the past.
A remnant of Waldensians still exists in their home valleys in Italy. They welcome visitors to step into the past and discover their historical roots. You can learn more about them at the foundation office or Chiesa Valdese. They would be more than happy to answer your questions.
But one doesn’t have to go that far if they live in North America. A community of Waldensians lives in Valdese, North Carolina. Each summer they reproduce their history in an outdoor amphitheater where they present the drama From This Day Forward. They’ve also constructed to scale an outdoor replica of the historical sites in Italy on their Trail of Faith. There are also other Waldesnian-related museums as well as things to do at the foot of the Blue Ridge Mountains. Visit their tourist office to get more information. 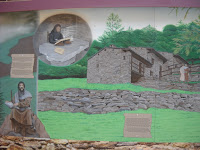 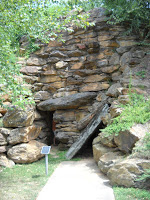 Replica of the Cave of Faith, Valdese, N.C.

If you’d like to know more about my contemporary romantic suspense Waldensian Series, you can visit my website at www.donnawichelman.com or go to Amazon.com.

(P.S. Pope Francis made peace with the Waldensian faithful in July 2015, when he asked forgiveness for crimes perpetrated by the church in past centuries.)