Like me, you probably noticed the Christmas season started a little early this year. Shattered and shuttered by COVID’s impact on our lives, the symbols of Christmas sprang up across our community almost immediately following Halloween. Perhaps even you put up your Christmas tree and hung lights before Thanksgiving.

According to a Denver Post article on November 19th, home decorators were busy by early November, spending more time and money than ever to get a “dose of light and happiness…” One Vail, Colorado resident was quoted as saying, “Why…would you wait any longer? Everybody needs the cheer now.”

What is it about Christmas that brings a light of hope to the human heart?

The word Christmas literally means “Christ mass.” The liturgical church refers to it as the Feast of the Nativity, commemorating the birth of Christ. Yet billions of non-Christians also celebrate Christmas as a cultural event—a time of peace on earth and goodwill towards men—a dazzling display of charity and good cheer when relatives gather and gifts are given. Parties and revelry often follow these occasions.

But did you know that Christians have not always celebrated Christmas? The early church never considered it. Jesus never mandated it, and no specific date of his birth was ever mentioned in Scripture. Instead, they concentrated on the arrival of the Magi and the events surrounding his resurrection, looking forward to his return.

The first time Roman records show a celebration of Christ’s birth is in 336 A.D., and December 25th became established several decades later. Devout Christians then and now scoff, since the greater likelihood of shepherds abiding in the fields watching their flocks by night puts Jesus’ birth sometime during the spring. Still, some have suggested the church chose the date to coincide with Roman pagan festivals to convince Rome to accept Christianity as its official religion, though further scholarship places this in doubt.

Regardless, Emperor Constantine eventually claimed Christianity and sanctioned it as the official religion. The celebration of Christmas spread throughout the western world, though some Christians, i.e. the Armenians retained Epiphany (January 6, the visitation of the Magi) and Jesus’ resurrection as more important.

By Medieval times, various pagan and secular practices were added to the celebration of Christmas. These include the Nordic Yuletide and gift-giving in the tradition of the fourth century Saint Nicholas. Evergreen boughs that once had been used to decorate homes and temples in pagan ceremonies to honor the gods of the sun and agriculture were brought into homes as garland and decorated Christmas trees. The Reformer Martin Luther is credited with adding lighted candles to the branches. 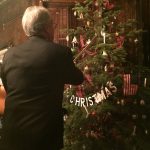 Christmas at the Hamill House, Georgetown 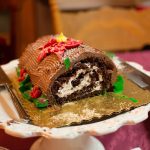 In addition, Christmas took on a raucous tone. Celebrants attended church, then returned home to drunken parties. Moreover, the rich delivered themselves of their decadence and debauchery by giving to the poor.

None of these traditions honored or gave tribute to Jesus.

To refocus attention on the purpose of Christmas, Francis of Assis created the first manger scene or crèche in 1223 A.D.—a living nativity with Mary and Joseph and the Christ child that also included an ox and a donkey. In time statues replaced people, and shepherds and three kings were added, though this was not completely accurate, since the Magi hadn’t arrived until almost two years later. 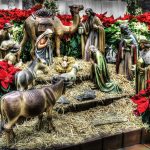 By the seventeenth century, the celebration of Christmas had become so entwined with the profane that Oliver Cromwell in England and the Puritans in America banned its celebration, saying it defiled the true Gospel message. The Scottish Parliament, led by Presbyterians, even outlawed the observance of Christmas between 1637. The United States didn’t make it a federal holiday until 1870.

In the United States throughout the 20th and 21st centuries, commercialism seems to have overshadowed any semblance of religious celebration. Many devout people today have adopted the tradition of opening Christmas gifts on Christmas eve–as Martin Luther did in the sixteenth century–and reserve Christmas Day in honor of Jesus’ birth.

So, what is it about Christmas that has led it down a bumpy road, and yet, it seems to be the brightest star in the lives of multiples of millions this year, whether Christian or not? Could it be that in spite of pagan symbols, underneath national tensions, over-top a virulent disease a higher truth transcends and gives us hope for a better future?

In Christmas, we find hope in God who came to earth as a human baby wrapped in swaddling clothes and lying in a manger, whose mission was to be the Savior, the Light of the world. In him, the Bible says, there is no end to his government or of peace, and he will uphold it with justice and righteousness (Isaiah 9:7). It’s what we all long for, and it is what he promises he will do. 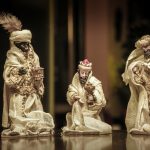 Perhaps, just perhaps, this turbulent year has made us take another look at the promise Christmas offers to a world that is broken and hurting.